data communication by telephone - how do two computers 'converse' over the telephone lines? 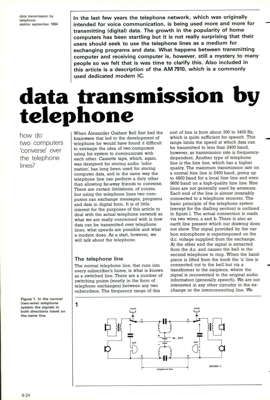 data transmission by telephone elektor september 1984 In the last few years the telephone network, which was originally intended for voice communication, is being used more and more for transmitting (digital) data. The growth in the popularity of home computers has been startling but it is not really surprising that their users should seek to use the telephone lines as a medium for exchanging programs and data. What happens between transmitting computer and receiving computer is, however, still a mystery to many people so we felt that is was time to clarify this. Also included in this article is a description of the AM 7910, which is a commonly used dedicated modem IC. data transmission by telephone how do two computers "converse" over the telephone lines? When Alexander Graham Bell first had the brainwave that led to the development of telephone he would have found it difficult to envisage the idea of two computers using his system to communicate with each other. Cassette tape, w...
Downloading of this magazine article is reserved for registered users only.
Login | Register now!