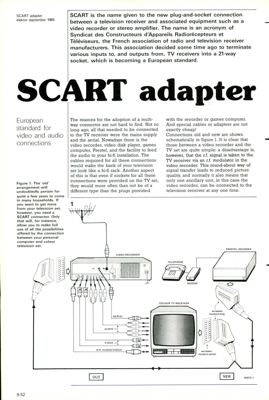 SCART adapter elektor september 1984 SCART is the name given to the new plug-and-socket connection between a television receiver and associated equipment such as a video recorder or stereo amplifier. The name is an acronym of Syndicat des Constructeurs d"Appareils Radiorecepteurs et Televiseurs, the French association of radio and television receiver manufacturers. This association decided some time ago to terminate various inputs to, and outputs from, TV receivers into a 21-way socket, which is becoming a European standard. SCART adapter European standard for video and audio connections Figure 1. The "old" arrangement will undoubtedly pertain for quite a few years to come in many households. If you want to get more from your television set, however, you need a SCART connector. Only that will, for instance, allow you to make full use of all the possibilities offered by the connection between your personal computer and colour television set. The reasons for the adoption of a multi-...
Downloading of this magazine article is reserved for registered users only.
Login | Register now!