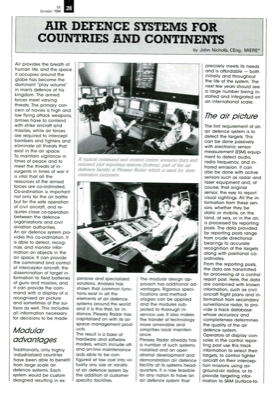 EE October 1986 AIR DEFENCE SYSTEMS FOR COUNTRIES AND CONTINENTS Air provides the breath of human life, and the space it occupies around the globe has become the dominant "play volume" in man"s defence of his kingdom. The armed forces meet varying threats. The primary con- cern of navies is high and low flying attack weapons, armies have to contend with strike aircraft and missiles, while air forces are required to intercept bombers and fighters and eliminate all threats that exist in the air space. To maintain vigilance in times of peace and to meet the threats of in- surgents in times of war it is vital that all the resources of the armed forces are co-ordinated. Co-ordination is important not only for the air battle but for the safe operation of civil aircraft, and re- quires close co-operation between the defence organizations and civil aviation authorities. An air defence system pro- vides this co-ordination. It is able to detect, recog- nize, and monitor infor- mation on obj...
Downloading of this magazine article is reserved for registered users only.
Login | Register now!