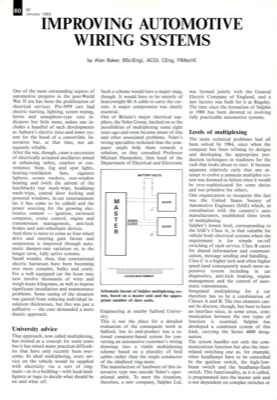 60 EE January 1989 IMPROVING AUTOMOTIVE WIRING SYSTEMS by Alan Baker, BSc(Eng), ACGI, CEng, FIMechE One of the most outstanding aspects of automotive progress in the post-World War II era has been the proliferation of electrical services. Pre-1939 cars had electric starting, lighting, screen wiping, horns and semaphore-type turn in- dicators but little more, unless one in- cludes a handful of such developments as Auburn"s electric raise-and-lower sys- tem for the hood of a convertible. In- novative but, at that time, not ad- equately reliable. Such a scheme would have a major snag, though. It would have to be entirely of heavyweight 60 A cable to carry the cur- rent. A major compromise was clearly essential. One of Britain"s major electrical sup- pliers, the Volex Group, latched on to the possibilities of multiplexing some eight years ago and soon became aware of this and other associated problems. Volex"s wiring specialists reckoned that the com- puter might help them towards a s...
Downloading of this magazine article is reserved for registered users only.
Login | Register now!