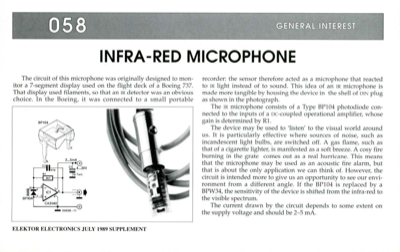 058 INFRA-RED MICROPHONE The circuit of this microphone was originally designed to mon- itor a 7-segment display used on the flight deck of a Boeing 737. That display used filaments, so that an IR detector was an obvious choice. In the Boeing, it was connected to a small portable recorder: the sensor therefore acted as a microphone that reacted to IR light instead of to sound. This idea of an nz microphone is made more tangible by housing the device in the shell of DIN plug as shown in the photograph. The IR microphone consists of a Type BP104 photodiode con- nected to the inputs of a Dc-coupled operational amplifier, whose gain is determined by R1. The device may be used to "listen" to the visual world around us. It is particularly effective where sources of noise, such as incandescent light bulbs, are switched off. A gas flame, such as that of a cigarette lighter, is manifested as a soft breeze. A cosy fire burning in the grate comes out as a real hurricane. This means that the ...
Downloading of this magazine article is reserved for registered users only.
Login | Register now!