« Back
PIC
About the article 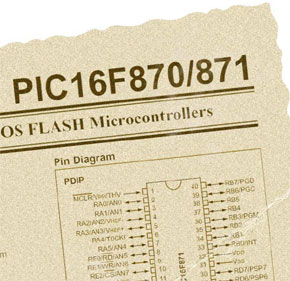 Several articles using the PIC16 series of Microchip microcomputers have appeared in this magazine but so far there has been little or no practical use of their more powerful cousins in the 18F series. The devices in the 18Fxx2 series of microcontrollers that has been recently introduced are pin for pin compatible with their predecessors from the 16F87x series and incorporate some significant improvements.In this first of two article instalments we look briefly at the main differences between the 16F and 18F series and in detail at the changes to the structure of the RAM (Data Memory). Table 1 summarises the key features as compared to the 16F series.There is an increase in ROM and large increase in RAM and this alone will justify their use for some people. But there are lots of other improvements too:–Up to 40 MHz clock (compared to 20 MHz).–Single cycle hardware multiplier.–Long look up tables.–Ability to write to Flash ROM during program operation.–Many new instructions.–Much improved addressing for both RAM and ROM.
Downloading of this magazine article is reserved for registered users only.
Login | Register now!