« Back
LED
About the article

Star LED instead of incandescent lamp 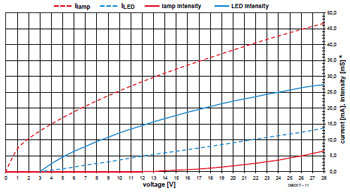 Traditional indicator lamps with a filament are often also available these days — on a one-for-one replacement basis — in versions made with LEDs. In this implementation the LED, together with a series resistor, is mounted in the traditional housing. In some applications there are wide variations in ambient light (for example day/night in the cabin of a vehicle). The lamps are dimmed at lower ambient light levels so that they are not annoyingly bright, usually using a series resistor. When you replace the incandescent signal lamp in such a circuit with an LED-lamp then the LED will be much too bright in the dimmed state.