Whether it ends up joining the EU or not, Turkey will soon join the European electricity network – and market. Already next year a full integration of the Turkish network within the European continental electrical network ENTSO-E (formerly UCTE) will take place, leading to new opportunities for international energy companies.  The op...

Whether it ends up joining the EU or not, Turkey will soon join the European electricity network – and market. Already next year a full integration of the Turkish network within the European continental electrical network ENTSO-E (formerly UCTE) will take place, leading to new opportunities for international energy companies.

The opposition to Turkey’s inclusion in the European Union is well known. Paris and Berlin, to a different extent, fear a political integration in which Turkey’s demographic, economic, cultural and religious weight could disturb Europe’s balance. Many within Ankara’s political circles are worried that this Franco-German alliance might lead to the proposal of a new type of privileged partnership. For Prime Minister Recep Tayyip Erdogan, accepting such logic would be out of the question. Turkey aspires to a full and complete admission, not just enhanced cooperation in economic and military domains, which already exists.

There is one form of cooperation though, which has been developing serenely – as Paris, in fact, does not fail to stress – and this is in the field of energy. Because no matter what takes place at the level of political integration, by 2011, Turkey’s electric system, at least, will be European. Physically, through the connection of networks, but also economically, through economic and trade policies. Turkey is in the process of liberalising its electricity market, establishing free competition as well as a trading market which will allow it to trade with its European partners through a common set of rules.

The French network operator RTE (Réseau de transport d’électricité – Electricity transportation network), a subsidiary of EDF, but with a public service mission, has helped its  Turkish counterpart, TIAS, significantly in making this leap: the incorporation of the Turkish network to the European continental system.

‘This incorporation consists of a synchronized interconnection, which allows all of the networks within a same system to beat and operate in unison’, Dominique Maillard, president of RTE, explained, during a recent visit to Ankara. ‘This means that every fluctuation of either supply or demand, taking place in any country, will be distributed and counterbalanced by all the others. So, it’s really the expression of an electrical solidarity which helps to improve the security of supply’.

After testing in 2010, the change should be effective by 2011. Today, the Turkish network is only half the size of a network like France’s. However, as the country experiences yearly growth rates of  7 to 8 percent,  the two systems will eventually be equal in size. So it’s not a small “electric” country that will integrate into Europe.

The European continental electrical network UCTE – today called ENTSO-E – does not overlap with the EU. The British Isles are not integrated, and neither are the Scandinavian countries, historically connected to each other, nor the Baltic countries, which are integrated into the Russian system. On the other hand, the ENTSO-E system includes – in addition to the continental EU member-states – Switzerland and the Balkan countries, and even the three Maghreb countries (Morocco, Algeria, Tunisia).

The interconnection between Turkey and the European network is, for this reason, an important step in the realisation of the “Mediterranean electric loop”. It was during the Barcelona summit, in 1995, that it was decided to move, by 2010, towards a euro-Mediterranean energy market, uniting Europe with the southern and south-eastern shores of the Mediterranean Sea, an initative that was recently revived by French president Sarkozy as a new vision for the Union for the Mediterranean (UfM). 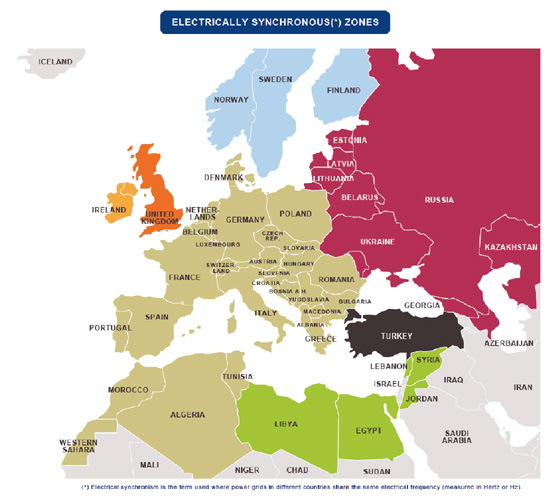 Today, the Euro-Mediterranean region still has three different areas, as shown on the map:

The progressive integration of these areas appears useful for several reasons. First, in order to cope with the rapid growth of electricity demand which is being experienced in the countries south of the Mediteranean. Second, to be able for Europe to make use of North Africa’s abundant resources in wind and solar power in the future. For this it is necessary to improve existing networks, especially to expand their capacity, and to have integrated markets based on common practices. The latter is not easy, southern countries are still dominated by centralized and State-run management, in contrast to the liberalisation taking place in the EU.

Build a Power Monitor with Bluetooth and Android App

Dye-Sensitized Solar Cells Get a Boost

Algae Teach Us How To Build Better PV Cells