Pixy2 is an artificial vision sensor for rapid recognition of moving shapes and colours. It follows objects at a rate of 60 images per second and has algorithms for recognition of shapes and colours. To better follow moving objects, it may be mounted (as an option) on a pan-tilt support, and control the vertical and horizontal movements itself.
Since the antique light dependent resistors which were sometimes called – a little pompously – photoconductive cells, light detection has always been one of the holy grails of electronics. They have been used for all kinds of functions which mainly fall into the category of motion detection. Slowly, detection techniques have evolved, somewhat laboriously, into what we now call recognition of shapes, colours and movement. Today we have complete cameras the size of one of these cells from yesteryear, and also processors capable of transforming their coloured images into signals, and processing them at a speed which allows them to be used for real-time tracking. That’s the case with the Pixy2, a tiny intelligent image capturing sensor which may be optionally mounted on a pan-tilt support. The module weighs only 10g!

The automation possibilities offered by these components and their associated software are phenomenal. For a few tens of Euros you can construct a tracking robot with artificial vision and close to instantaneous processing time. It would be difficult to imagine something more exciting to introduce programming to young people.

Getting to grips with these artificial vision modules is easy, because they connect directly to experimental boards like Arduino, Raspberry Pi or Beagle Bone.

Rest easy, you don’t need a rat’s nest of wires to get started. Pixy’s manufacturers have thoughtfully supplied a cable which plugs into the Arduino. And for the RPi, a simple USB cable will do.

For other platforms, Pixy2 has on board several other communication interfaces: SPI, I²C, UART, with simple and mostly well-tested protocols.


The whole line is Open Source

Everything is open on the Pixy2: the software, the firmware and the hardware. And very well documented, with lots of application examples. Pixy2 can also be used with Windows, Mac or Linux. There’s even a version of Pixy for LEGO Mindstorms!
Libraries for Arduino and C/C++ are available to users. In Linux environments (like RPi) programming in Python is facilitated by an API.
A bar code detector is integrated into the line-following algorithm.
When I told you they’ve thought of everything, there are even three small lights to see more clearly! 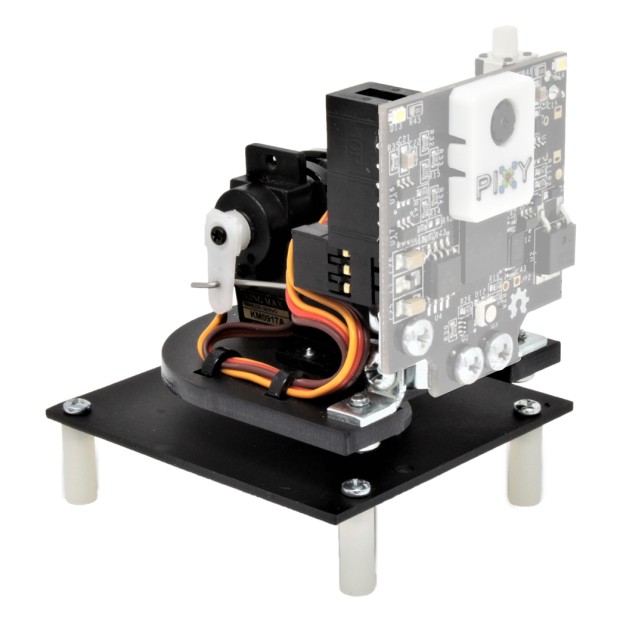