Status: Proposal
8827
8
18
7
votes
PUBLISHED
in Elektor magazine | September 2018 | Find it here
Most of the circuits to fade a LED in or out, are digital circuits using a PWM output of a microcontroller. The brightness of the LED is controlled by changing the duty cycle of the PWM signal. Soon you discover that when linearly changing the dutycycle, the LED brighness does not change linear. The brigtness will follow a logarithmic curve, meaning that the intensity changes fast when increasing the dutycycle from 0 to lets say 70% and changes very slow when increasing the dutycycle from lets say 70% to 100%.
The exact same effect is also visible when using a constant current source and increasing the current linear f.e. by charging a capacitor with a constant current.
How come ? Well, LEDs are non-linear devices, just like other diodes and show an exponential relation between forward voltage and forward current when increasing the voltage above the forward voltage drop of the junction.

In Fig2 you can see that the brightness perception of a LED has a logarithmic curve due to the exponential voltage to current relation. When the LED just starts "conducting" the intensity increases fast with increasing current. But once "conducting", the intensity increases slow with increasing current.
To compensate for this effect, we can choose between an open loop approach or a closed loop approach :
Schematics :
Read the full post
Show less 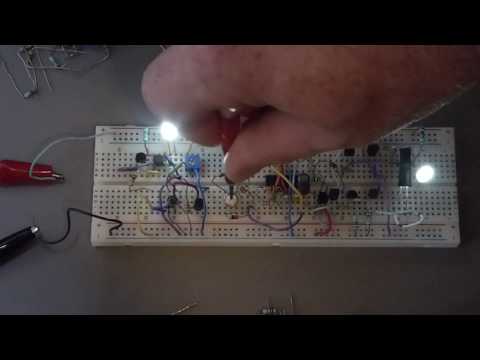