« Back
Dogan Ibrahim Android Review
Chapter 7 has entry level projects like: Digital Chronometer, Dice, Euro Millions Lottery Numbers, Geography Lesson, and Primary School Mathematics. Of course, any 10-year old can find the sleek equivalents of these in the Android Play Store in less than a minute, but their educational content is practically zero compared to going through the motions of “designing” and programming your own app, and learn as you progress.


The simple projects in Chapter 7 purposely use hardly any of the higher-level features of B4A explained in the preceding theoretical chapters of the book. Features like arrays, error handling and access to the smartphones inbuilt sensors are left to the “heavier” projects involving external computers, W-Fi, cellphone networks and the Internet.
But fist, the sensors available in the typical Android smartphone are explored in Chapter 8. Again, we learn about programming them through projects: Ambient pressure meter, Ambient light level meter, Proximity meter, accelerometer, and speech output. As in chapter 7, none of the programs make a claim to competing with commercial apps, and instead excel in crisp and clear elucidation how things work. In fact, the projects have a strong triggering effect, I mean constantly urging you to “do your own tweaking” as many Elektor readers seem to like best about the electronics hobby.

Although a cable connection between your Android smartphone and an external ‘computerette’ like an Arduino or a Raspberry Pi opens up a wold of programming possibilities, the book proposes going through Wi-Fi or SMS (texting) with the added benefit for readers of learning how to program these methods of communication. After all, who wants wires in 2019? No under-25 I have come across recently.
In Chapters 10 – 13 the following Wi-Fi and SMS (texting) interfaces are explained in great depth for use later on with the more complex projects.
Ch. 10: Android to PC (Wi-Fi)
Ch. 11: Android to RPI (Wi-Fi)
Ch. 12: Android to RPi 3 (SMS)
Ch. 13: Android to Arduino (Wi-Fi)
Ch. 14: Android to Arduino (SMS)

SMS I found a bit old hat initially until I realised it is useful and resilient for remote monitoring and control of equipment “with a number on the cellphone network” through one of these cheap 3G/4G modules. Like the heating system in a holiday home!
In chapter 15 I was delighted to see a relative newcomer: the Espressif ESP32 microcomputer. The chapter journeys from a short introduction to the device, to an LED flasher as a get-you-going example (which is not terribly original), and then to a millivoltmeter as a project. I would like to have seen the ESP32 given more coverage in the book. Also, the millivoltmeter project, although it has good educational value for B4A and Android programming, does not do justice to the computing power of the ESP32. A logging function, for instance, would have made the project more interesting, or the multiplexing of several inputs. 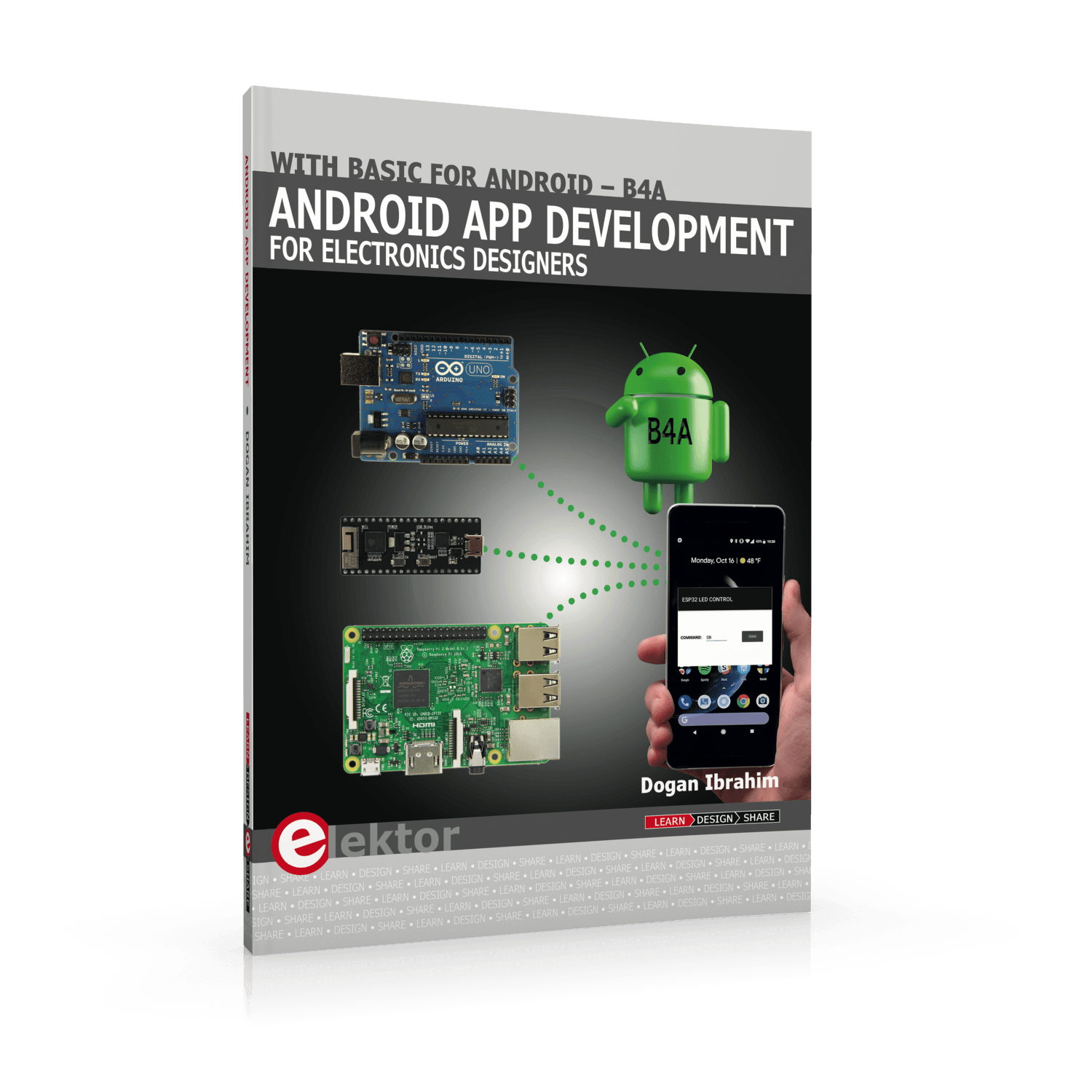