While unpacking this oscilloscope, its large display immediately catches the eye, namely an 8-inch LCD with a resolution of 800x600 pixels (the competition usually has a 7-inch display) plus touch screen functionality. I have not seen this before in this price category. After switching the instrument on, this first impression is not diminished: Wow, what a beautiful screen with a wide viewing angle!

Now back to the scope itself. For under 400 euros you will have a 4-channel model with a touch screen, an input bandwidth of 60 MHz and a sampling rate of 1 GSamples/s. While it is true that this sample rate drops to a half or a quarter when multiple channels are used, this is typical for this price category. The instrument has a robust appearance and has a nice finish. The only thing that I'm not fond of are the rotary knobs, that is because these have a soft rubber finish.

The instrument is supplied with four probes, a mains power cable, a USB cable and a brief getting-started manual. A comprehensive manual is available as a PDF.

Becoming familiar with the operation of the XDS3064E goes quite quickly. However, a few of the functions require some further explanation and it is then a good idea to consult the full manual. The majority of the screen is used for the scope display with a maximum of four simultaneous signals, at the bottom the most important measurements are continuously visible. When pressing one of the function buttons there also appears a selection menu on the right side. All menu items can be selected with buttons along the bottom and right of the screen, but you can also touch the screen. Decoding functions for RS232, I²C, SPI and CAN are built in as standard.

The activation of the four channels is achieved with four buttons CH1-CH4. When a channel is active the corresponding button is lit up. To see which channel is selected for the operation (there is, after all, only one set of buttons for the horizontal and vertical settings), you have to look at the bottom left of the screen: the selected channel is shown with a yellow frame. This takes a little getting used to. But otherwise the operation and the menu structure are quite obvious.

In addition to the operation using the push and rotary buttons (there is also a multi-purpose rotary knob), the touch screen also offers the option of selecting the various settings directly from the screen by simply touching it. Using two fingers you can also change the time base or the sensitivity, or move the signal trace. The sensitivity of the (capacitive) touch screen is excellent. Only don't make the movement too fast when moving the signal traces otherwise there is a kind of delayed-response effect. 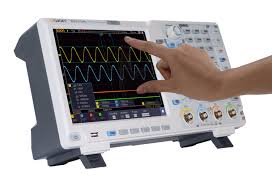