« Back
Review Display DDS Siglent Function Generator
The unit offers a wide range of analog and digital modulation methods: AM, DSB-AM, FM, PM, FSK, PSK and PWM. I particularly liked the ability to add harmonics to a signal of your choice. Sweep and burst functions can provide sine waveforms or other waveshapes.

The use of EasyPulse technology for pulse generation ensures that very low jitter occurs on the signal edges. DDS generators tend to produce jitter on the output waveform when the sampling rate is not an integer multiple of the output frequency. According to the spec the unit can produce square waves up to 30 MHz with jitter less than 300 ps+0.05 ppm of period. As far as I can tell by observing the output signal the technique is very effective.

The built-in frequency counter goes up to 200 MHz and is a nice addition – admittedly I haven’t had the chance to use this function yet.


The number of available waveforms is pretty awesome. In addition to the standard waveforms, the function generator offers 196 preprogrammed waveforms divided into groups. The choice is so great that you would rarely need to use the Windows EasyWave software to create a signal shape.

On the bench and to sum up

The front panel layout was a little different from previous models (the SDG830 for example) in that the soft menu buttons are positioned under the screen rather than down the side I had to get used to the operation, because the soft menu buttons for frequency, amplitude, etc. are not placed next to (as with the model SDG830), but under the display. With buttons alongside it is probably more logical, because they are right next to the corresponding value on the display but navigating my way around the controls quickly became second nature after just a day’s use.

The square and pulse signals showed some overshoot at first, which turned out to be the result of incorrect BNC cable termination. Once this was corrected, the square-wave signals (rise time approx. 4.5 ns) looked perfect. Pulses can be produced and you can define their rise and fall times.

In truth, for my purposes, the Siglent model SDG830 provides me with just about all I need, but the SDG1032X offers so many extras that I think it’s worth the expense. The harmonic setting in particular is extremely useful and invites you to experiment with distortion. The burst signal setup is also super easy — not to mention the second (synchronizable) independent generator output which is very practical.

The SDG1032X also offers some interconnectivity with other test equipment produced by Siglent. Owners of Siglent’s SDS1104X-E or SDS1204X-E oscilloscopes can connect to the SDG1032X using the included USB cable to display the frequency characteristics of a network as a Bode plot. This is a really handy feature and saves bench space; there is now no need for a separate signal generator such as the Siglent SAG1021 together with its associated software. I searched through the operator’s manual but couldn’t find any reference to this feature. I tried it out and according to Siglent it works for all models in the 1000X, 2000X and 6000X series. If you are heavily into analogue design, this feature gives the 1032X a significant advantage over the SDG830.

I've been using the SDG1032X a lot since it arrived and am very pleased with it. It's a good, well built, piece of test equipment and well worth the money; especially as Siglent are offering a hefty discount on the list price at the moment. 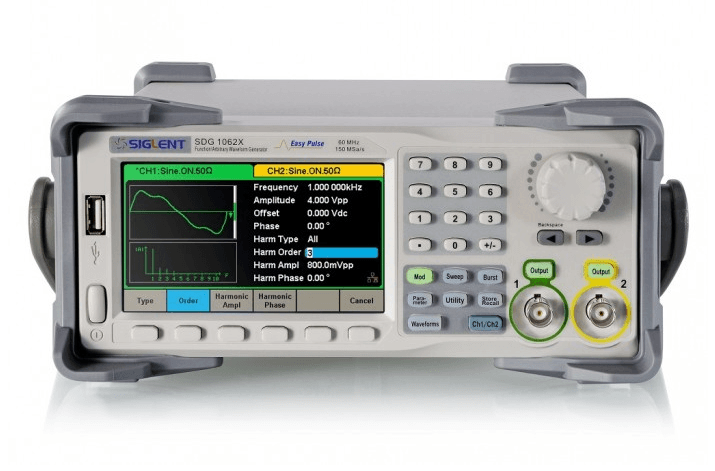