Tipped off by my friend Gregory I recently bought an LED panel with 32x64 two-color pixels (that is a total of 4096 LEDs!, ref. DE-DP100 from Sure Electronics). I wanted to make some sort of message board out of it, but I was not sure what would be the easiest way. And then suddenly it struck me: why not use an mbed module? The mbed module would offer me programming in C/C++ and a USB file system that would be perfect for storing message files written on a PC. mbed is for fast prototyping and this would be a nice project to see if mbed’s promises would hold true.

Published in issue 405, September 2010
Although the LED panel is supposed to run from 5 V and an mbed module from 3V3, studying the LED panel’s PCB revealed that it was built with HC logic only and so it should be possible to run it from 3V3. That was one problem out of the way, no level shifters needed, and I hooked up the mbed to the LED panel with just 12 wires. Note that the mbed module itself is powered from the USB port. 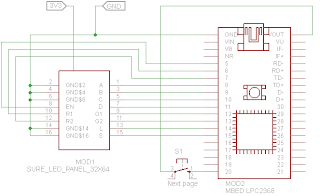 The LED panel has an SPI-like interface and is rather easy (albeit a bit bizarre) to control. It took me some time to figure out that the datasheet provided by the vendor had the CLK and the LATCH lines swapped, but after that I was able to put pixels where I wanted them and in the color of my choice (red, green, orange and black).

The next step was to add a font so that I could write text. If you have ever bitmapped a font you know how tedious a work that is, so I turned to the web. A quick search found me a freeware utility called The Dot Factory and 10 minutes later I had a C source file ready with all the printable characters from an 8-point Arial font (but that could have been any of the fonts available on my PC). That is so much faster than doing it by hand! Another 15 minutes of coding later I was able to print a string on the display anywhere I wanted.

Now I needed a way to get text from a file on the display, together with some commands to control the way the text would be shown. This meant adding an mbed file system object to my code (1 line). Of course I wanted text scrolling, color & position control so I decided to use an INI file for this. A new search on the internet found me a neat little C library named inih that turned out to be very ergonomic: importing and integrating it into my mbed project took a mere 5 minutes; I am definitely going to keep this library!

The final task now was to implement text scrolling properly. This was actually not too difficult using a cheat and thanks to the way the font was implemented. About one hour later I had it all working the way I wanted. 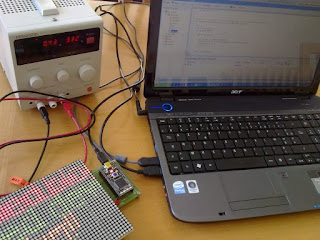 This is the point where features started creeping in. It would be nice to have several pages of text, scrolling should be possible in both directions, scroll speed per line, etc., etc. This is also the point where I started wasting time. Add feature, compile, check, change, compile, check, change, … After some hours of this I decided to stop and freeze the project; you have to draw the line somewhere.

The result is pretty satisfying. The message board can now display seven pages of four lines of text. For each line you can specify a color, an (x,y) position and a scroll speed and direction. Two global parameters allow you to control overall scrolling speed and display brightness, but these are not so useful. I added a push button to browse the pages. Watch this short video to see the result.

Where is the integrated player?

The mbed environment really helped to finish this project quickly, the hardware is ridiculously simple and the software is pretty small. The executable is 51 KB and needs 5.5 KB of RAM (mainly for message storage). All in all I think I spend about one day cooking this up, that’s not too bad, isn’t it?

More mbed on our Select Page >>


More LED on our Select Page >>