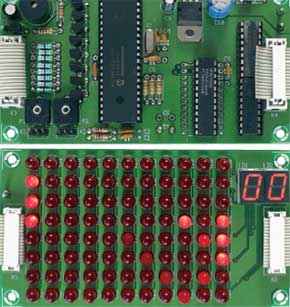 Provided they manage to recognise them in the first place, youngsters will label classics like Pacman and Pong as video games although historically they are ‘video games’, the concept behind them dating back to the 1950’s. in this article you’ll find a modern (computer) version of such a prehistoric game that — as far as we are concerned — has not lost any of its compulsive character.It is easily forgotten that the first electronic games were played on a TV set. In fact, technology at the time nearly did not make it to TV altogether. In 1951, TV technician Ralph Baer thought it would be nice to use the telly as a screen for an electronic game. His boss however did not see the promise and the idea was quickly abandoned. Years later, however, it started to surface again and in 1966 Baer started to build one of his early prototypes. The video game was born.
Downloading of this magazine article is reserved for registered users only.
Login | Register now!

CAM/CAD data for the PCB referred to in this article is available as a Gerber file. Elektor GREEN and GOLD members can exclusively download these files for free as part of their membership. Gerber files allow a PCB to be produced on an appropriate device available locally, or through an online PCB manufacturing service.

Elektor recommends its business partner Eurocircuits as the company of choice for its own prototypes and volume production in selected cases.

The use of our Gerber files is provided under a modified Creative Commons license. Creative Commons offers authors, scientists, educators and other creatives the freedom to handle their copyright in a more free way without losing their ownership.