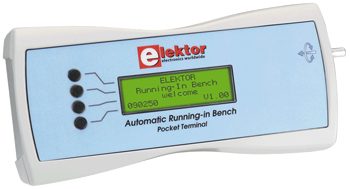 Our series of three articles about the running-in bench for model i/c engines begun in April concludes this month with a presentation of the automatic running-in software. In order to take full advantage of the software (CBRMrunning-in.hex,) we’re going to be describing here, you’ll need the following equipment:
- A built and tested CBRM board and a GMMI pocket terminal (described in the April 2009 issue of Elektor)
- A test bench fitted with all its detectors and actuators (described in the May 2009 issue of Elektor)