Review: Walabot -- or how to transform your smartphone into a radar

The Walabot (why this strange name that sounds like a robot for a device that is a radar?) is the size of a big smartphone, but about three times as thick. On what turns out to be the backside there is a kind of protruding logo that reminded me of Batman. It is actually a magnet that can be used to stick the Walabot to your phone or tablet. It doesn’t stick to my phone, but maybe it will stick to yours? (The Walabot Maker Pro comes with a metal disk that you can stick on the back of your phone to provide a magnetic surface for the Walabot to attach to.) The other side of the Walabot is a smooth, black surface.

While unboxing the Walabot a screw fell out, so I unscrewed the three remaining screws too and had a peek at the insides. In between the two plastic shells lies a strangely via-stiched PCB with rectangular parts that I had never seen before on one side and a shiny custom chip surrounded by some other parts on the other.

The Walabot connects to the PC through a USB 3.0 micro B cable. (Beware: both ends fit in a USB socket, but the wrong end will short and may destroy your USB port. Trust me, I inadvertently tried this.)

After downloading the SDK (Windows or Linux) driver installation is effortless. You can now try the SDK demo application.

This video shows the demo application in Target Detection mode and in Breathing Detection mode. As you can see targets are detected but the distance calculations seem rather nervous and inaccurate. The cone on the right side of the PC display is in reality dark green.

This screenshot gives a good view of the parameters and returned data of the demo application. Click on it for a better view. 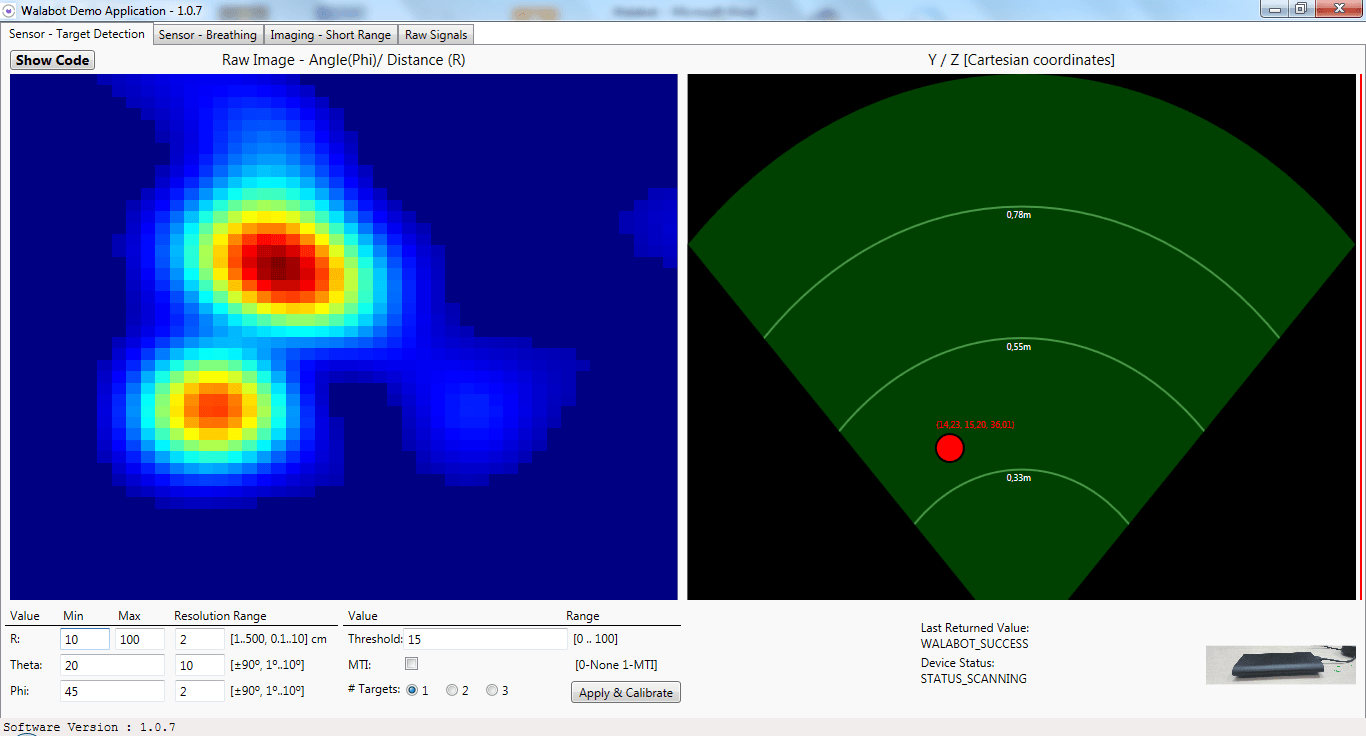 Here is a video showing the Raw Signal mode of the demo application. You first select a profile (one of three: Imaging, Sensor or Sensor-Narrow) and click Apply & Calibrate, then you can select up to four signals for display. These signals are acquired with antenna RX/TX pairs. There are 18 antennas in the Walabot. Unfortunately it is difficult to tell which signal belongs to which antenna pair, because the graph color is not indicated in the UI.

Finally a video showing the In-Wall Pipe Detector (Imaging - Short Range) in operation. The device does detect objects or so inside the drywall, but I don't find it very convincing. The confidence level that it displays is not very high either, so it isn't even convinced itself. Since the capability of looking inside objects seems to be one of the main attractions of the Walabot, I find the results rather disappointing.

This screenshot gives a good look at the short-range interface. Again click on it for a better view.

What I downloaded was an SDK and so I should be capable of developing an application for the Walabot. The demo application can display the pseudo code of the demos (see below), but we want real code.

The SDK comes with a few examples and I first unpacked the C# ones because I had the Visual Studio 2015 C# compiler installed on my PC. Loading the example went fine, but building it didn’t. I managed to get rid of some errors after copying the file WalabotAPI.NET.dll from the installation folder to the examples bin\Debug folder, but eleven others remained, all of the type:

The type or namespace name 'WalabotAPI_NET' could not be found (are you missing a using directive or an assembly reference?)

I probably am missing some kind of library or header file. There is an ‘inc’ folder with a header file but I don’t know how that works with C#. Instead I decided to load the C++ example (which required me to install the C++ compiler first). Besides a rather suspicious warning

the example compiled fine. This may be intentionally, but I decided to make the local array YposSorted global for the test. The example runs in both cases, and opens a terminal window saying ‘no tragets detected’ (including typo). Sometimes it detects a target and briefly shows its parameters.

Having come this far, you know that you are now in a position of writing your own applications. Succinct Doxygen documentation can be found on the Walabot website. Good luck.

The Walabot can also be used directly with a smartphone; a short USB OTG cable to connect the two is provided in the box. The phone must run Android Lollypop and mine does (v5.1.1). Unfortunately the Google Play Store did not allow me to install the App because it thinks that my phone is not worthy. It is a recent Samsung Galaxy J5 though, but, true, it is not in the list of supported phones.


What is wrong with my phone? It sure looks nice enough, right?

Looking at the demo on my PC and at the videos on the Walabot website it is clear that the device produces some interesting data, but not very stable at least so it seems. In a static setup the data is quite consistent – a non-moving target does indeed not move – but when motion is added to the mix the data starts to become a little jumpy. Besides getting a good understanding of what exactly the collected data represents I suspect that a good amount of data filtering and stabilizing will be necessary before you can publish a Walabot killer App.

Some in-depth documentation to explain how to treat the antenna pairs and their signals and some general theoretical background information would probably be much appreciated by developpers seeking to exploit the captured data in a useful way.

The Walabot defintely is an innovative device with interesting capabilities. If it will have a bright future will probably depend a lot on the amount of support that application developpers can count on. Of course it is a first try and so the real potential is unknown, but I cannot help but feel that in the hurry to get the Walabot on the market some essential steps have been skipped, leaving the device in a spot that may prove just too difficult to motivate application developers to invest time and money to pull it loose. Let's hope I am wrong.