If I had to choose a soldering station, I’d have a strong preference for the A-brands. It’s not a question of snobbery: in general, I only want to buy tools that I can enjoy using for many years. Quality and reliability are important factors, but the long-term availability of accessories or spare parts also plays an important role for me.

With all due respect, I must admit that I do not consider Voltcraft — Conrad's house brand — to be one of the top brands. Yet their ST-100D soldering station looks interesting enough to put through its paces and to investigate just what you get when you go for mid-range in terms of price.

You only get one chance to make a first impression, and I can only say that the ST-100D scores well in that respect: a nicely finished, robust metal case for the soldering station and neat standard for the soldering iron. I didn't delve deeply into the history of this set, but on the web I read that there is at least one predecessor with the same type designation, which suggests that this model was worth its salt over the years and deserved a makeover.

I have no idea if the exterior had a (successful) facelift only, or if more got modified, but for a review of the current version that’s not very interesting either. It is important though to know that it is apparently not a passing fad and that gives us enough confidence in the availability in the future of a replacement soldering iron and spare tips.

There is not much to be said about the heavy metal casing. It’s very firm and doesn’t move when you operate the buttons — just the way you want it. A clear LC-display indicates the iron’s set (desired) and actual temperature. A bar graph on the left-hand side of the display gives an indication of the station’s power output according to the instructions for use, but it looks more like it indicates the extent to which the actual temperature deviates from the desired value.

To set the temperature, we find a rotary control on the front, which works better than the Up and Down keys typically found on soldering stations nowadays. There are also keys for three preferred temperatures that can be easily adjusted, which is quite handy too.

For sure, there’s an On/Off switch on the front, the connection for the soldering iron and a 4-mm socket for equipotential bonding. The station lacks a timer that automatically regulates the temperature if the iron is not used for a longer period. If you want to enjoy the use of soldering irons for a long time and wish to conserve energy, you will have to think about shutting down the soldering station in time.

The only ‘hidden’ function in this unit is the temperature calibration, which, according to the manual, should be performed when another soldering iron is connected. Not everyone will have a thermometer handy that can measure such high temperatures (up to 450 °C). However, it’s essential for this adjustment. The soldering station has been matched to the supplied soldering iron at the factory. Furthermore, the temperature may differ slightly when a different soldering iron is mounted. In that case it’s a matter of setting an offset for the display, but of course you also need a suitable thermometer.

To be honest, I find this one a little disappointing. I really like it when a stand can be placed securely on the table and doesn't move when I insert or remove the iron; in that respect, this set doesn’t score particularly well. A little more mass would have made a better impression on me.

A sponge for wet cleaning and a dot of ‘brass wool’ with matching cover plate for dry removal of solder and resin residues are included. However, the solder stand only offers space for either one at a time. I prefer to use the wet sponge for cleaning the tip during soldering jobs; I only use the dry metal for more thorough cleaning, but changing it is a bit more cumbersome with this stand. The manual doesn’t mention any suitable tips for the soldering iron. But if you look up the ST-100D in Conrad Electronics’ web shop, at the bottom of the page under ‘Recommended accessories’ you will find a series of pens with diameters ranging from 1.2 mm to 3.2 mm, chisel and pencil models as well as chamfered tip models. Interestingly, one of the pictures shows the logo and name of the company Hakko; their 900M-T series of soldering tips (a type designation that’s also visible in the pictures) is much more extensive and available “all over the web” at great prices. As far as tips are concerned, this soldering iron is an excellent choice, although the cheaper ones — most likely copies of the original Hakko tips — are guaranteed “dubious-quality”.

Hakko only supplies this series of tips as spare parts, but no longer uses them for more recent soldering irons. From inquiries, Hakko now uses the improved T18 series, which can certainly be used as a replacement for the 900M series.

Our Toolcraft ST-100D came with a pencil-shaped tip with a 1.2-mm diameter tip, which is very nice for all finer (SMD) work and rework. I would have preferred a slightly larger chisel tip of about 2.4 mm, which is more universally applicable and therefore also suitable for heavier soldering jobs. Fortunately, the cost of the pens is not so bad, and it never hurts to have different sizes or models available anyway, so I would immediately order a few.

So how does it solder?

In the end, the most important question when talking about tools is: do you enjoy working with them? The cable between iron and station may be a bit thick, but long enough and certainly not annoyingly stiff or heavy during soldering. Even at the highest temperature the handle doesn't run annoyingly hot — a pleasant observation. But how a soldering iron works for you is and remains a matter of taste: I found this Toolcraft station good and pleasant to handle myself, while a colleague found the tip too long to be able to solder precisely (meaning the hand is too far from the solder tip).

All in all, for the price of the Toolcraft ST-100D I think you get a good soldering station, even though I see — as mentioned before — a few points where this set could be improved. Well... if the perfect soldering station would exist, there wouldn’t be that many brands and models in the market. 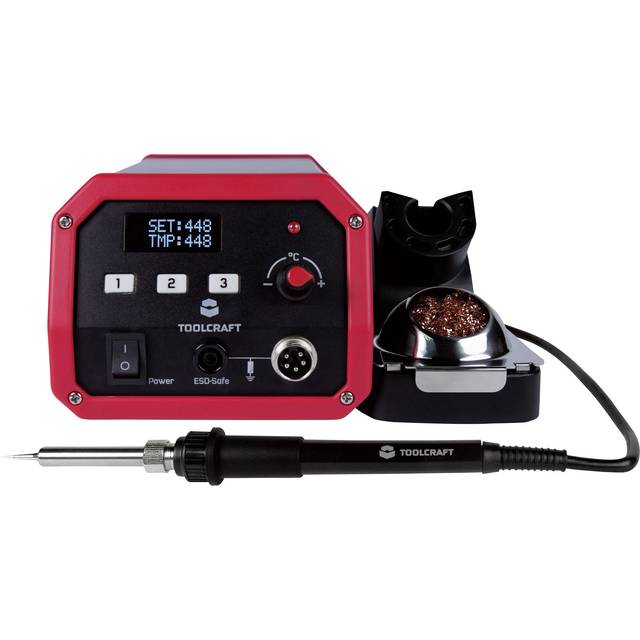