If you work with different sorts of waveforms fairly often, a separate signal generator is nice to have. And with the prices of instruments now available from Chinese manufacturers, it doesn’t have cost an arm and leg. We tested the Siglent SDG830 in the Elektor Labs – an arbitrary waveform generator with a frequency range up to 30 MHz with sinusoidal output.
If you’re an electronics enthusiast or serious hobbyist, you need some basic instruments in your home lab in order to build your projects. The most basic of these is a multimeter, but an oscilloscope is actually equally indispensable. Next comes a lab power supply, a signal generator, and so on.

Many modern USB scopes have a built-in signal generator, giving you two instruments in the same package at an affordable price. However, they often do not have a wide range of settings or are clumsy to use if you want to create relatively complex waveforms.

If you work with different sorts of waveforms fairly often, a separate signal generator is nice to have. And with the prices of instruments now available from Chinese manufacturers, it doesn’t have cost an arm and leg. In the past Chinese instruments had a poor reputation, but in recent years several brands, including Rigol and Siglent (not as well known in Europe), have been offering good instruments at attractive prices. This review focuses on the Siglent SDG830, an arbitrary waveform generator with a frequency range up to 30 MHz for sinusoidal signals and a sampling rate of 125 MS/s. The price of this signal generator is a bit more than 300 euros, which is affordable even for a hobbyist.

After unpacking the compact instrument, the first thing you notice is that it looks quite sturdy, with a metal enclosure fitted with soft rubber bumpers on the corners. The front panel looks neat and tidy, the instrument is nicely finished, and it is nearly as good as competitive products from the big brands.

As with most modern signal generators, the SDG830 has a generously sized TFT display that shows all the important settings. At first glance the display seems to have a moiré pattern, but that turns out to be caused by the matt finish of the plastic window in front of the screen. The display itself is razor-sharp and has a broad viewing angle. The waveform is also shown on the display. That turns out to be extremely convenient in practice. You can see the results of your settings right away, so you do not have to guess or to connect a scope to know what signal is present at the output. 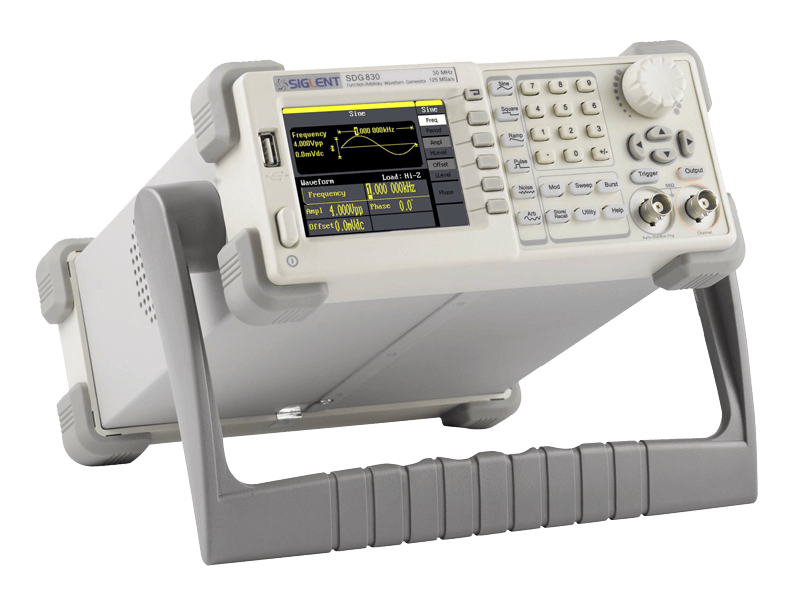