For use "in the field" such a local AP is very handy, but you have to continually switch between your standard WiFi network and the AP of the WiFi-Bridge. It is also possible to add the WiFi-Bridge to an existing WiFi network, so that switching between them is no longer necessary. This is very convenient if you mainly use the SmartScope at home or in the lab.

For this purpose the SmartScope app has the ability to detect WiFi networks, select one of them, enter the password and then make the connection. The WiFi-Bridge receives this data and then switches over to the selected network. When you switch the WiFi-Bridge on the next time, it will automatically log in to that network again. The app recognises the WiFi-Bridge on the network and will connect to it, after which you can operate the SmartScope as usual and the measuring results are displayed on the screen.

If necessary, the WiFi-Bridge can also be returned to operating as its own AP. This can be achieved via the app on the tablet or with the reset button on the device.

In use, the WiFi-Bridge is extremely simple. If you read the above description then you can effectively get started right away. Connecting a tablet to the built-in AP of the WiFi-Bridge is effortless, two LEDs on the top of the device clearly show you how and which connection is present. The data communication between the WiFi-Bridge and tablet is very fast, the measured signals appear just as fast as with a direct USB connection. I have, out of interest, tried the range of the WiFi-Bridge and it easily reached a distance of about 10 metres. The current consumption, including the SmartScope, appears to be quite small, even after hours of use the battery was only half used!

The connection with my own network required a bit of effort initially. It takes a bit of looking around in the app to figure out how this works exactly, but once you know it, it is easy enough. After sending the login details to the WiFi-Bridge there is a short wait to see whether the connection was successful. I noticed that it is best to do this in a location with a strong WiFi signal, otherwise it is possible that the WiFi-Bridge attempts to connect but then switches back to its own AP.
After starting the SmartScope app on the tablet it starts to search whether a WiFi-Bridge can be found on the network. If that is the case, then it takes another ten seconds or so to make the connection. But after that everything runs just as fast as with the built-in AP of the WiFi-Bridge.

The WiFi-Bridge from LabNation is a great peripheral for the SmartScope and is very interesting for anyone who would like to measure wirelessly across some distance. Very recommended to any owners of a SmartScope! 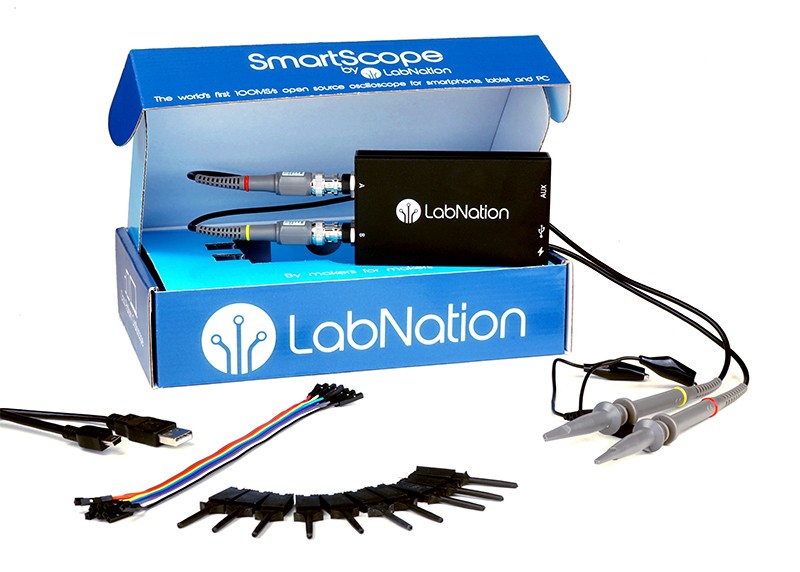 
More Wireless on our Select Page >>